Coca Cola is undoubtedly the world’s most popular beverage! Coke was introduced by the Coca Cola company in 1886 making it a rather true and tested favourite of generations of people in over 200 countries (at least according to the company). But do you know that coca cola can be used in a number of other ways too? This list should give you some ideas on how to get more from your coke than usual: 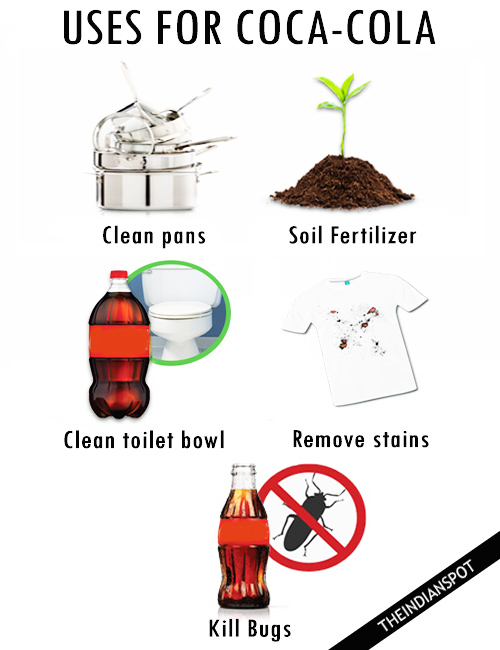 The chemicals in coca cola can be very effective to help neutralize the pain of jellyfish stings. Just pour the coke over the area in which you have been stung and feel the relief. The best thing about this is that while most people at the beach are unlikely to be carrying anti-sting lotions, they are likely to be carrying a bottle of coke.

Coca-Cola is also useful in the kitchen, especially on burnt pots and pans. For any pan with burnt on messes, pour a can of Coke into the pan and simmer. The mess should easily wipe away. You can also soak kettles and other kitchen items in Coca-Cola to remove scale and build up.

The garage is one of the most difficult to clean areas of a house. Simply soak the soiled and greasy areas on the garage floor in Coke and then wash it with water and the stubborn stains will vanish almost instantly.

Simply pour Coke into the bowl. Pour it around the rim so it flows over the stains around the inside of the bowl. Let it sit for at least an hour. The acids in the Coke will break down the stains. If you want, you may use a brush to scrub the toilet bowl. Flush the toilet. Most of the stains should have been dissolved by the phosphoric acid in the Coke.

Watering azaleas or gardenias with Coca-Cola increases the the acidity in the soil, which azaleas love, and boosts plant performance. The sugar in the Coke feeds microorganisms in the soil, increasing the organic matter in the soil.

Coca-Cola is incredibly helpful when removing stains from clothing and fabric. Coke will easily remove grease stains, as well as blood spots. Remember that Coca-Cola itself is brown, so stains on light fabrics might be better removed another way.

Pour some cola into a shallow dish and place it in the garden near the problem area. Slugs, snails, and other bugs will go in for a drink and never come out again! This is a very good first line of attack in your garden and it can obviously save you an enormous amount of money by reducing the need for pesticides.