Hydrogen Peroxide is composed of oxygen and hydrogen molecules and thus is the safest natural sanitizer. It kills microorganisms through the process of oxidation i.e it reacts and beaks into oxygen and water. It has multiple uses in our regular lives. The following are some of the Top uses of Hydrogen Peroxide: 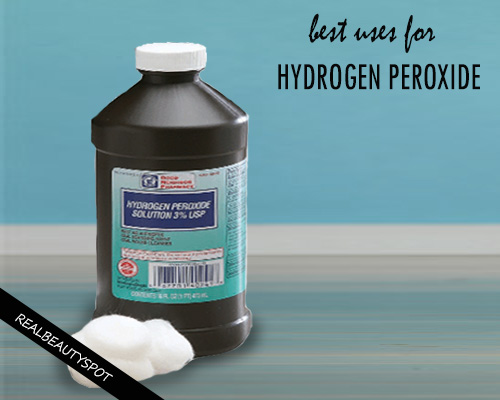 1. Infections: If you have any bruises, cuts, wounds, fungus or any other form of infections, hydrogen peroxide will deal with it. Just take a cotton ball and dip it in the liquid. Apply it on the infected area and leave it for 3-5 minutes. The bacteria will be killed and you will be relieved.

2. Mouthwash: You don’t have to shell out extra cash on mouthwash. Take 1 teaspoon of the liquid in your mouth and hold on for 5 minutes in the mouth and spit it out. It serves as a cleanser and can lighten your teeth. Do not swallow hydrogen peroxide  as it might be harmful.

3. Sanitizer: Hydrogen peroxide is a natural sanitizer as it kills the germs and prevents infections. Take a spray bottle and store a mixture of hydrogen peroxide and water in equal proportion. Spray it on mirror and glass items. Wipe it after sometime.

4. Mold And Mildew Control: Mold and mildew are a constant problem, Use a spray bottle of hydrogen peroxide and apply directly to problem areas.

5. Whiten teeth: Hydrogen peroxide is a powerful and effective tooth whitener. Mix together baking soda and hydrogen peroxide until it forms paste. Apply it to the surface of your teeth using your toothbrush or finger, avoiding the gum line. Let it sit on your teeth for a minute. Rinse with water and brush with a toothpaste.

6. Bathroom disinfectant: You can also spray some liquid in the bathroom to disinfect it. Mix  hydrogen peroxide and vinegar in equal proportion and store it in spray bottle.

8. Stain Remover: It serves as a bleaching agent thus removes the stains. Be it blood stains or oily yellow stains,  hydrogen peroxide is effective. Pour it directly onto the stain and let it sit for about five minutes. Blot and rinse in cold water.

9. Laundry Bleach: Remember how I mentioned that hydrogen peroxide can act like bleach?  Throw a cup in with your laundry to make your whites brighter and crisper.

10. Tile and Grout scrub: Mix hydrogen peroxide with white flour or baking soda to create a thick paste. Apply to grout and leave it on overnight. The next day, gently scrub and rinse with water.

11. Remove Tub Stains: Spray hydrogen peroxide on soap scum, dirt, and stains in the bathtub. Let it sit for at least 30 minutes then rinse to loosen grime and make cleaning easier.

12. Clean Toilet: Pour about half a cup of hydrogen peroxide into toilet bowls and let it soak for at least 30 minutes to clean and remove stains.

13. Whiten Your Nails: Soak fingertips and toes in hydrogen peroxide to naturally whiten your nails.

15. Carpet cleaner: For homemade carpet cleaning solution, simply mix one part of 3 percent hydrogen peroxide with five parts water. It not only cleans and removes stains, but also serves as a disinfectant.

Hope this article had been informative to you. Do share your feedback with us.

A few best tips and tricks to follow that can help you greatly in getting rid of these awful circles around your eyes and will also prevent them. Using an extra pillow to keep your […]