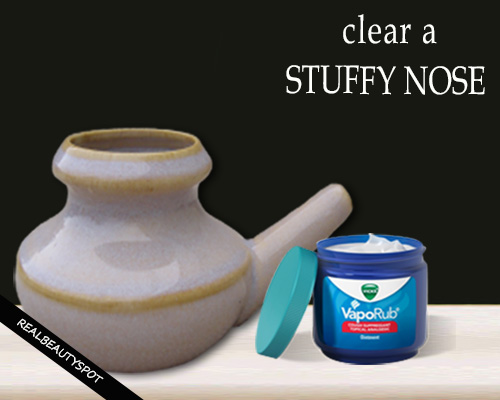 Here are some amazing remedies to get rid of stuffy nose.-

Shower: – A steamy shower can help you deal through this situation. When you take a shower, the steam from the shower helps in thinning out the mucous in the nose and sinuses thus reducing the inflammation. The result of which will make you help in breathing normally. You can also go for a steam inhalation instead.

Hydration a must: – Make sure that the body is always hydrated. Keep up the fluid flowing with any kind of liquid, be it tea, soup, juice etc. This will help in thinning the mucus in the nasal passages, which will decrease the pressure in the sinuses thus pushing the fluids off the nose.

A warm compress: – A warm compress is also a good option for stuffy nose. Soak a towel in warm water, Squeeze out the excess water and then fold it and place it on the face. The heat will provide respite from all the pain and the warmth and will help in relieving some of the inflammation in the nasal passages. You can keep doing this many times to get relief.

Neti Pot: – The neti pot has been used from a long time in India. This is a gentle as well as an effective way of clearing the nasal passages of the mucus and allergens. Through this method, the salt water delivered to the nose helps to start relieving congestion. To do this fill the neti pot with a saline solution comprising of warm water and salt, then the spout of the pot has to be inserted in one nostril and at that time your head needs to be tilted to the other side. This allows the solution to flow into the nasal passage and then come out of the other nostril. The saline solution for this process should be made from a pharmaceutical grade salt.

Steam: Inhaling steam is the best cure for stuffy nose. Take some boiling water and add a few drops of peppermint oil or some Vicks VapoRub in the boiling water. Now, inhale the steam of this water at least 2-3 times a day.

Peppermint tea: – Peppermint has menthol which will help in thinning out the mucus and also to open up the nasal passages. There peppermint tea consumption during such times is highly recommended. Peppermint tea along with the effect of menthol, steam and the warmth of the tea will all together speed up the process of clearing the stuffy nose.

Eczema refers to a medical condition characterized by inflammation and irritation of skin. Atopic eczema and atopic dermatitis are the common forms of eczema. While eczema is often hereditary, various factors can also trigger it, […]

Vaseline Intensive Care Cocoa Glow Body Lotion is the next variant in the newly launched Intensive Care range in India. The other variants are Aloe Soothe, Deep Restore and Advanced Repair. All of them are […]

Sweet dish is liked by all after of a special meal. I tried White and dark chocolate mousse with a nutty and crunchy flavor. Very few ingredients are required to make it and you get […]